Despite COVID Restrictions, the Weedsport Music Department Plays (and Sings) On 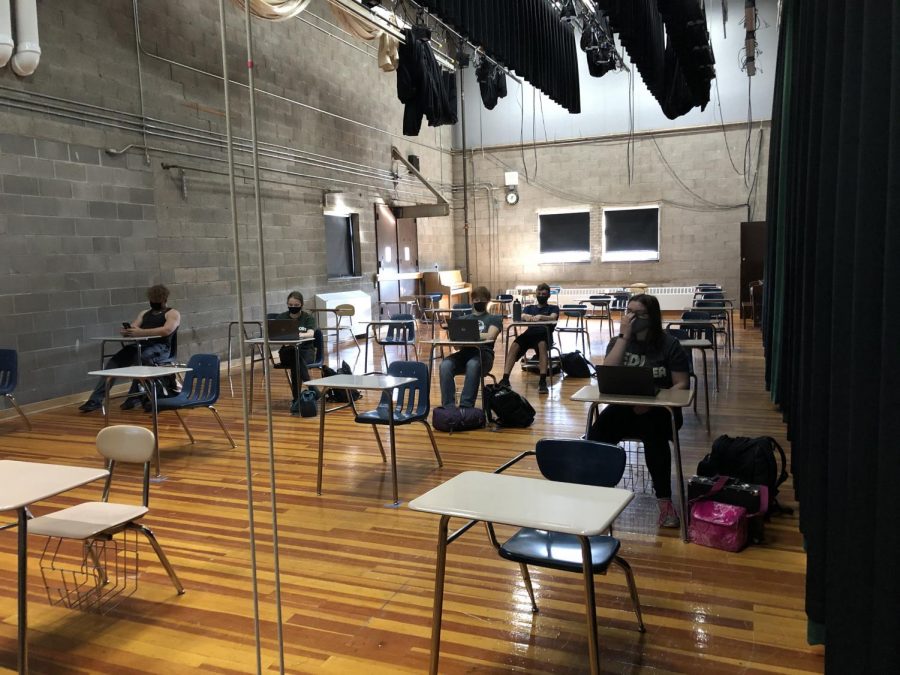 Due to space restrictions this year, some music classes are meeting in a new educational space on the back of the auditorium stage.

In the middle of the Coronavirus, it feels as though the whole world has suddenly shuddered to a stop. From sports being restricted, to desks being socially distanced, to entire music departments across the country struggling to find ways to keep enthusiasm for the performing arts active, 2020 hasn’t exactly been a leisurely stroll. Nearly all of the spring performances of plays, musicals, or concerts were canceled with little notice back in March. The same happened with the closing night production of Weedsport’s Newsies. But while Weedsport has faced these trials, make no mistake, the performing arts department is still making music just as happily as it used to.

Mrs. Kerr, one of the two driving forces of Weedsport’s music department and teacher of the Weedsport choruses, sat down to give some insight on the biggest effects of COVID-19 on the music department. “A lot of things have been affected,” she said. “The music department has had to consolidate our space with the 5th and 6th graders moving into the music wing, and ensembles have been a little tricky as well, because even though we’re allowed to play and sing, we still have to be socially distanced and in sections, so it’s never the full ensemble. We don’t really have a performance we’re working towards at the moment either, so it feels a little ambiguous.”

Mr. Veiga, the other member of the high school music department and the conductor to Weedsport’s wind ensemble, touches on the subject of performances as well. “The problem with virtual performances, too, is that you have to sit down and you have to do micro-changes to everything to make sure that everything works,” he explains. “But I think it will be easier this year than it was last year.”

The music department has also made a huge effort to keep music classes as consistent and natural as they’ve always been. “We are still trying to create as much of a normal experience as we can,” Kerr explains.

When Weedsport went all virtual in the spring, the choirs and ensembles were not exempt from the orders, and with lack of experience in putting together virtual choruses and instrumental ensembles, it had reverted to a lesser workload, leaning on assignments about researching different aspects of music and giving feedback on it as opposed to playing and singing. “This fall, we’re really trying to make a concentrated effort in the ensembles to make it as close to our regular ensemble as possible. Even though we’re distanced, we are still working on songs, our students are receiving lessons and small group instruction, we still have section leaders and governmental positions so there’s a sense of normalcy,” Kerr said.

“We’re just starting an assignment where they’re arranging their own holiday tunes and recording those individually to put them together for a virtual concert,” Veiga explains, regarding what the band half of the music department has been focused on recently.

Mrs. Kerr is doing something similar in the chorus, separating the students into quartets and letting them choose a holiday carol to record. “Cayuga County Music Educators Association is doing All-County virtually this year, and any student in the appropriate age groups are able to send a video in for that and participate,” Kerr additionally explains. “And we will have some opportunities like that for just Weedsport students. We’re working hard with administrators for opportunities and tools that will make everything easier, as well.”

Both Kerr and Veiga have admitted that, although workshopping music around COVID-19 has not been easy and certainly not ideal, there are a few upsides to having a change of pace in classes. “It’s a little nice not having to focus on a concert,” Mr. Veiga said. “We still have a sort of concert with everything we have planned for recording, but it’s not the same. This is the first time in my career that I don’t have a concert to drill for every couple of months. We don’t have to work on every piece being concert-ready within a few months–I can send students in to do something or work on something just to help them get better.”

Mrs. Kerr also enjoys the social aspect that comes with the change in classes and schedules. “Especially with the 7-9th graders, we have to be more disciplined within the class in order to get work done because they’re younger, but because it’s a smaller group now, if they want to make a joke or talk to me for a few minutes, there’s a bit more wiggle room,” she said. “We’ve always sort of been able to do that with the 10-12th graders, but it’s good.”

“I’m able to make connections with them too, which is great,” Kerr says about the students who take music classes entirely virtual. “If they come to their lessons, we still have that one-on-one or small group lesson where I get to know them. I’m grateful I can still do that.”

“I just want them to get better this year,” Mr. Veiga says when asked about what he expects from his students during the recent changes. “I expect them to be practicing, it’s been eight months since they’d picked their instruments up, so I completely understand that they weren’t where they’d normally be at the beginning of the year. Instead of losing two or three months, they lost six. My goal is to get them back to where they were.”

The music department has made a very concentrated effort to understand some of the pressure that students have had to deal with during the time of Coronavirus, and have been shaping their curriculum around keeping them involved in music with high enthusiasm while still recognizing that there are going to be factors that have changed.

Most every facet of life and school specifically has changed in some shape or form during the pandemic. No one could have predicted masks, or widespread quarantines, or fully remote learning/teaching. While there are many different crutches for people to lean on to get through such stress, for many in the performing arts department, music was that crutch. Things might not be exactly the same, and there are still day-to-day frustrations that students and teachers alike are learning how to deal with, but in the end, it’s important to find a place where people are using the same crutch as you.

Mrs. Kerr states it best: “We’re finding ways to give students that sense of singing and making music in a community, and being together, because that’s what they need right now.”