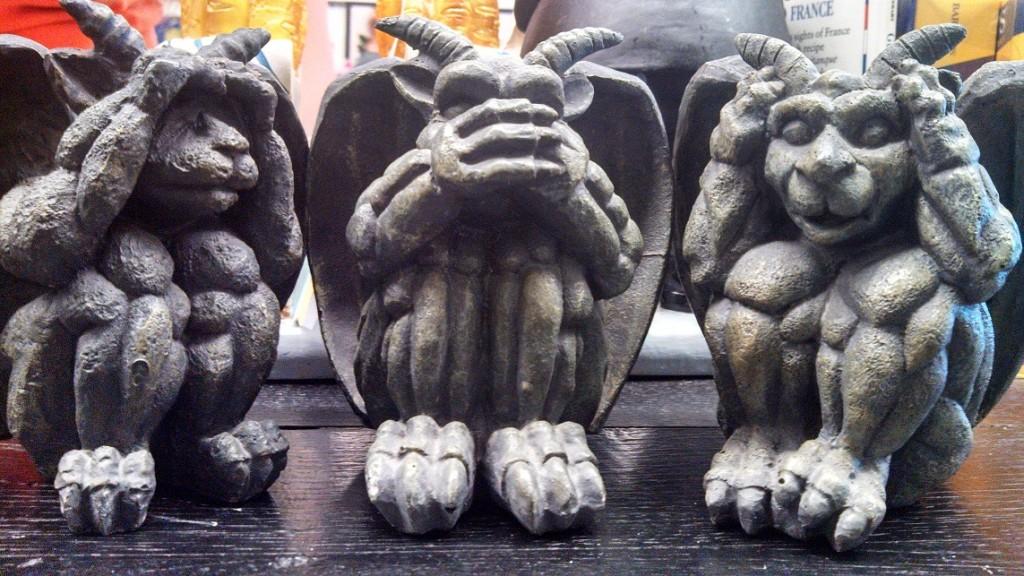 Gargoyles and Grotesque are two very similar works of art, but they get mixed up all of the time. Both structures are commonly known, and have a very eerie look to them.

The term gargoyle originates from the French word “gargouille.” Gargoyles are used for many reasons. They ward off any evil, harmful, or unwanted spirits, to protect homes, and churches. They were also used as a water spout, to drain rainwater that may harm, or ruin a building. The water would pour out of the gargoyle through a trough that was cut in the figure’s neck, that went through the mouth, and out.

Gargoyles are usually made from granite, and are found on old churches, and gothic structures. In the 12th century, they appeared in Europe on churches, and attracted people to become a part of the Roman Catholic Church. Egyptians, Greeks, Romans, and Etruscans used animal heads as gargoyles, like lions.

During the 18 century people stopped using gargoyles, because when the old or poorly made ones fell off of buildings they caused great damage, and scared people. Instead of using gargoyles, the idea of drainpipes was born.

Gargoyles came to be from the story, “The Legend of Gargouille.” This tells the story of a dragon creature with bat wings, a long neck, and the ability to breathe fire through its mouth.

There are multiple versions of the story. One was a chancellor of the Merovingian king, Clotaire II, who subdued La Gargouille with a crucifix. The other version claimed the creature was captured by the chancellor, and another man.

In both versions, La Gargouille was led back to Rouen, and burned the creature. However, La Gargouille’s head, and neck would not burn, because of it’s own fire breathing abilities. Instead, the head was mounted on a church wall to scare off evil spirits, and to protect the church.

Grotesques are very similar to gargoyles because they too are used for protection. Grotesque comes from the Latin word “grotto” which means a small cave, or hollow.

The word grotesque is used as an adjective in literature meaning strange, ugly, unpleasant, fantastic, or disgusting. It is often used to describe weird shapes, or distorted forms, like Halloween masks.

Grotesques do not have a water spout like gargoyles, but are simply stone carvings, or paintings of creatures. They can be used as protection like gargoyles, or decorative paintings, and sculptures.

Another name for a grotesque, is a chimera. These are mythical creatures very similar to grotesques. Both can be imaginary creatures, human and animal hybrids, dragons, or demons. They both like gargoyles can be found on a church, or an old styled building.

Grotesques, and Gargoyles are a perfect Halloween decoration, or even just an everyday decoration on a church or old home. They are quite alike, but now maybe you can be able to identify which one is a gargoyle and which one is a grotesque!