A World Record You Won’t Forget 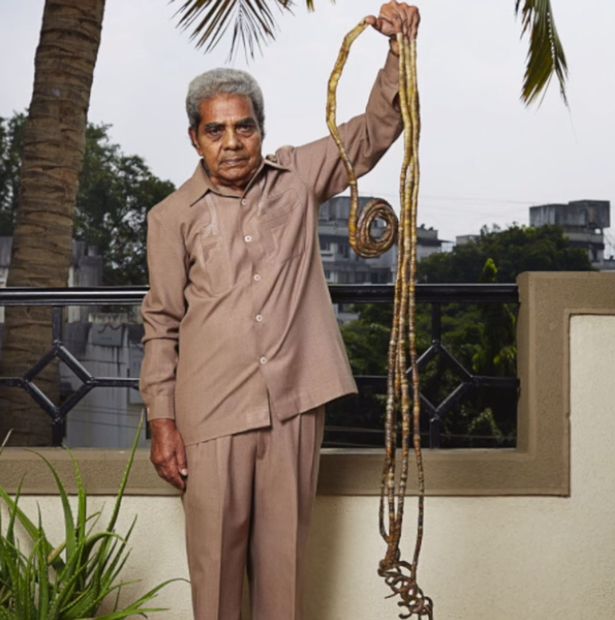 A 77 year old resident of Prune City, India hasn’t cut his nails since 1952 after an unforgettable experience.

The resident, named Chillal, made his way into the Guinness World Record Book with his nails at a total of 30 feet long! That’s 358.1 inches long all together. His longest nail, which is his thumb nail, is 6.5 feet long!

While in school, Chillal had a teacher who also had rather long nails and was especially careful to keep them long and prevent them from breaking. In a way it seems as though this teacher was Chillal’s inspiration for growing out his own nails.

However, one incident with a particular student in Chillal’s class left his teacher with a broken thumb nail. The teacher was outraged when one of his students accidentally ruined his best nail and his pride and joy. As punishment, all of the students were severely beaten.

Chillal says keeping up with his nails is hard work! Nails are very fragile and can break easily. This means taking extra precaution and care when doing everyday activities, even sleeping.

“I can’t move much, so every half an hour or so I wake up and move my hand to the other side of the bed.”

John Hawks, a biological anthropologist, told LiveScience that he, along with many other scientists, question why humans even have nails while other mammals have claws. Scientists are still pondering this question.

So is growing out your nails to extreme lengths worth a shot in the Guinness World Record Book? Or would you rather keep them to a reasonable length and not take the chance? Here’s what some people of Weedsport think:

Mrs.Fancher thinks, “It’s impressive that he grew his nails out that long and had that kind of dedication to something like fingernails, but I also think it’s disgusting because how does he wash his hair?”

Erin Zellar had similar thoughts saying, “How do they even do anything… That’s just nasty! He probably has a nail fungal disease or something!”

Finally, Mr.Ward feels that “It’s kind of gross that he has long nails like that because then stuff gets stuck under his fingernails.”