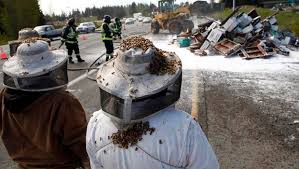 Car accidents are one of the top ten leading causes of death in the United States. One of the biggest causes of car accidents is falling asleep behind the wheel, and a recent accident involving a truck of honey bees has showed the accidents can have many unfortunate consequences.

Wednesday afternoon, a truck carrying millions of bees crashed in Wyoming because the driver fell asleep at the wheel. Those who were at the scene of the accident witnessed the hives breaking open and the millions of bees flying off in every direction.

One Highway Patrol Trooper, Aren Peter, reported that “probably a football field in any direction from the truck was swarming with honey bees.”

Recent statistics show that one in twenty five Americans have fallen asleep while driving, and many more have continued to drive while drowsy despite the dangerous outcomes. Driving while drowsy makes the driver make rash decisions that they normally wouldn’t because they are unable to think clearly. Sleepy drivers avoid the signs and continue to fight off their longing for sleep without thinking what could happen if they actually do end up falling asleep.

The National Highway Traffic Administration has concluded that car accidents happen every minute of every day, but to look at this issue in a larger sense, each year there are roughly 5.25 million car accidents taking place. Driving is risky as it is, so don’t make things worse by driving drowsy