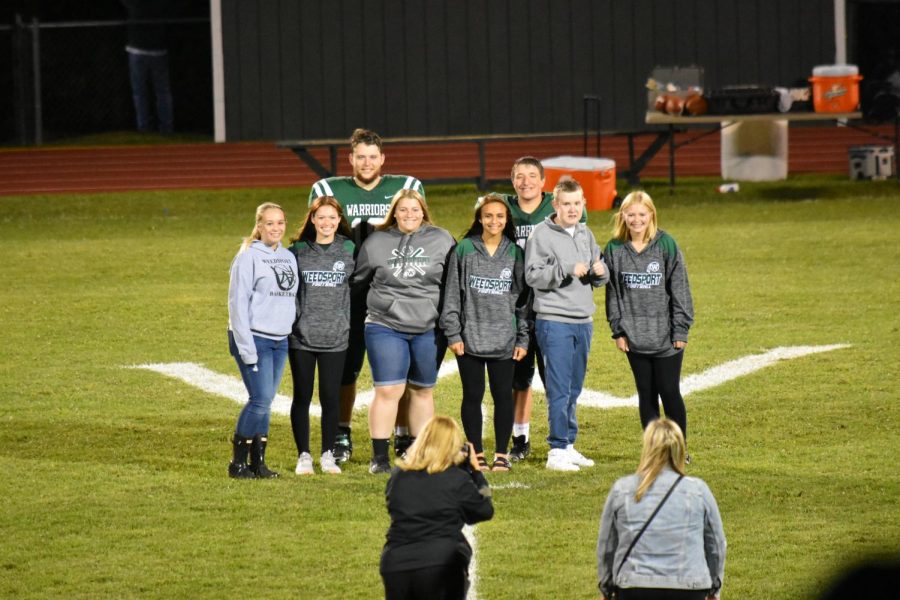 The 2019 Homecoming Court is recognized at a recent game.

It’s a Friday night, and the clock ticks to seven. The rest of the town is quiet, but Weedsport High School is wide awake. A myriad of elementary-aged students throw a football in the courtyard as, a hundred yards away, our football team begins the face-off against tonight’s rival. The crowd is assembled on the hill. It’s a big crowd, as it always ends up being.

Football has always been an important fixture of the social community in Weedsport. People who wouldn’t naturally see each other in town spend the nights catching up and watching their kids. Students run around and socialize, using the sporting event to spend time with people in the grades above and below them. But there is still one defining question: Why did the football games become more social than sport in the first place?

Football is important everywhere, particularly in small rural communities like ours. “It’s a social gathering place on Friday nights in the fall,” Health teacher and Weedsport Varsity Football Coach Jon Sgarlata says about the games. “If you came here any year in history in the fall you’re gonna see green and white on the field and people up on the hill. It’s a tradition, it’s a community event.” He explained. The football games are important for students because their peers are playing, and important for parents because the kids on the field are theirs.

The United States’ most popular sport on television, and in person, is football. It resonates with our citizens because it is solely ours; we created it, we reworked it, we spread it to other countries. It is, in its entirety, an American sport. Which is where Weedsport comes in. Weedsport is a small town, its inhabitants twined together and connected through friendships and their children’s friendships. The school is an important fixture of the community, and the community is an important fixture of the school. Alumni and parents will always care about how the program is doing, especially if their kids are involved with it. It’s the reason why the switch to 8-man angered and interested so many members of the town and the community. It was a source of conflict in people who opposed the switch because they didn’t want the program they’d been involved with for so long to suddenly do a 180.

“There was definitely a drop in attendance, there was a two-year stretch where there wasn’t a ton of buzz around football.” Sgarlata goes on, discussing the back-to-back years in which, as the football team was consistently losing, citizens lost their passion for attending the games.

“Even the players weren’t excited to play. It wasn’t as big of a deal, and we weren’t getting as excited about it, and that’s why a lot of people didn’t go,” Weedsport Senior Bridget Hickey states.

Friday nights are also a time in which students of all grades can mingle together and spend time as a group without the limitations of classes or teachers watching strictly over them. “A lot of the times I’m just talking and I’ll, like, look over at the game,” Hickey goes on. “I try to go to every home game. In the past, I haven’t, and I feel like I kind of missed out. Especially now that I’m in senior year, I’m trying to spend as much time with my friends at the games as I can.” Students care about the games. They care about having a school-related function that gives them the freedom to move around and be themselves while still being among their peers. It’s no less an social event than it is an athletic one.

It comes down to one simple thing. Football is important to the community because it’s important to the country. The games are a time when the students of Weedsport come together to share in the sociality if the school and the temporary home we may find in the lights of the field.

Coach Sgarlata states it the best: “We’re only a town of 3,000, but it’s really important to those 3,000 that care about the team and football. There’s the old saying that ‘If you want to rob a bank in a small community, do it on a Friday night.’”