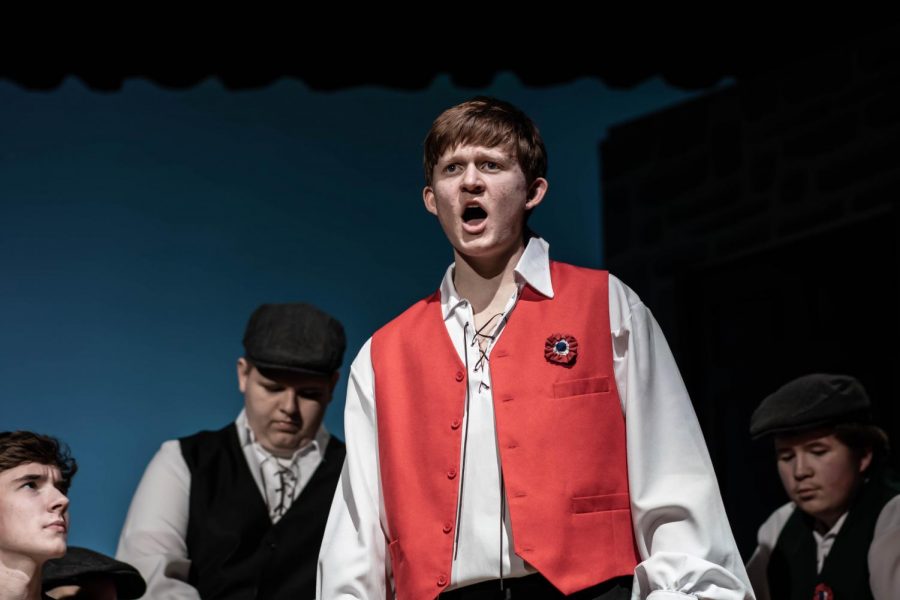 “My life is not that interesting.” says Aaron Brown. He’s wearing a gray shirt, and he leans forward in his seat, as if thinking deeply about the next thing to say. Are you involved in any extracurriculars, is the question, and he lists off the school musical, band, chorus. He doesn’t do sports, he points out. “But I like to bake a lot.”

Brown is a junior at Weedsport High School, avidly involved in the music program and the Envirothon team. When I asked to write a piece about him, the only thing he asked was, “Why me?” which is a funny enough question by itself and already reveals an abundance of features of his personality. “I’m not that interesting,” he adds, the same thing he says in his interview.

“I tend to stay out of that,” he says with a shrug, when asked about political or social issues he feels strongly about. “Because I know I’m ignorant about it, and there’s definitely a few things I would be passionate about, if I decided to look into it. But I just like focusing on school rather than politics.”

He’s tentative in the beginning, wringing his hands as he thinks, but he loosens as the questions go on. “A lot of people call me AA Ron, because of a skit by Key & Peele,” he says, and he laughs slightly. “I guess that’s my nickname.” He talks about how he handles being overwhelmed in school, explaining how he unwinds and calms down.

And he goes on to talk about influential teachers in his life; Mrs. Austin, Mr. Hay and Mr. Corbin, to name a few. He likes how they make classes interesting, how they care if a kid is listening or not and want the best for their students. “There’s so many, though,” he pauses, thinking, and adds, “There’s so many amazing teachers like that, at least that I’ve known. It’s not like you’re just learning from a robot.” He recalls. Brown understands concepts more in the classes that are engaging, and he has more fun in them, too.

“No.” He says, when asked if he has a favorite funny story about himself. But then he laughs, and demands, “I’m kidding, I’m kidding. Probably the one people find the funniest is the scar on my elbow,” he points to it, for reference, a jagged crescent on the underside of his arm. “Because when I was in sixth grade, me and my sister were messing around with a door,” he recalls. Brown banged both elbows through the door in his fervor and sliced his arm open on the wood. “Everyone thinks that I jumped out a window, but I didn’t, I swear. It’s just a funny story now.”

“I’m an open book,” Brown goes on to say. But people do have misconceptions about him. Most people think that he’s one of the smartest kids in his class, because he’s in advanced math, but in classes like college history, he claims to have no idea what he’s doing. People seem to consistently ask him for help on assignments and homework, but, according to Aaron, he just tells them: “I can try, but you’re probably going to get it wrong because of me.”

“People around me have been such a good example to me,” Brown states, when asked about a defining moment in his life which has made him the person he is. “Times I’ve been with my family and friends, I tend to make decisions based off of the good things that everyone else does, at least I try to. Sometimes I slip up, but I try my best, which is all you can ask for.”

“How do I stay so positive?” Aaron laughed and scratched the back of his head. “I just try to think of how the other person is feeling.” Brown does what he can to think about what he says before he says it, to inspect the repercussions his words will set in motion within the other person. “I feel like, when you’re in a bad mood, you do need to mourn sometimes, but sulking in your own pity never helps,” Aaron explains, shrugging, as if to say: but isn’t that obvious? Being positive is the best way he can keep himself adrift in high school, he explains. And, sometimes, the only way. “And it’s definitely something I learned,” he laughs, referring to the previously-mentioned positivity. “I guess being positive is just one of those habits I picked up from other people around me.”

“Oh my god, that?” Aaron laughs, shaking his head. Can you go into the infamous Aaron Brown fan page, is the question, and he starts chuckling before the sentence is over. “The infamous Aaron Brown fan page was run–and I’m about to reveal a big secret that no one knows about,” he jokes. “It’s actually run by William Sterling.” Originally, Brown explains, Will started taking pictures of Aaron at his lunch table and wrote funny captions to go along, but halfway through, he told Aaron about it, and Aaron started letting him take pictures. “It was just a fun time.” Brown explains, smiling. A lot of people laughed about it, he goes on. “Especially Mr. Hay.”

“The one that got the most likes,” Aaron explains. “Was somewhere around 350, and that’s not a lot compared to the 1,000 followers that the page had, but it was still strange to realize that it’s 350 people who saw my face and decided to double tap on it. Especially since I don’t know a lot of them.” He shrugs simply, laughing, and leans back in his chair. He’s gone from tense-shouldered and tight to laid-back, gesticulating plainly, as we’ve talked.

It comes down to one very simple point. Aaron is an interesting person. He loves pies, and reading, and he just finished the Inheritance series by Christopher Paolini. He always says hi to people in the hallways, and he knows how to make people laugh better than anyone most of us have ever met. He’s a talented musician, a good student, and a nice human. He’s just a good friend to have, and a good person to know. If you need cheering up, you can count on Aaron Brown.

Aaron says it best: “Sometimes, you just need to take the best, and leave behind the negative.”