How to Prevent a Tragedy? 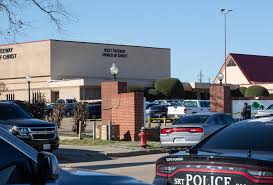 Police set a perimeter at the West Freeway Church of Christ in White Settlement Texas.

Recently there was a shooting in a Texas church that has been a very big focus in the media.  This shooting occurred during a Sunday church meeting and claimed the lives of three people. This tragedy has been the grounds for major unrest within the gun rights debate and even has a few disgruntled citizens looking to start a civil war.  The Johnny Green sat down with Weedsport History Teacher Mr. Nicklaw and Sophomore Sal LoMascolo to get some insight into how others view this tragedy.

On Sunday, December 29th, 2019, a gunman entered the West Freeway Church of Christ in White Settlement, Texas.  The gunman used a shotgun to claim the lives of two innocent churchgoers, one of which being an armed security guard present for the church’s safety.  In September, Texas passed a bill that allowed armed security to be present at churches within the state. This resulted in the prompt taking down the shooter after he shot and killed two people at the church.  Hopefully, shootings such as this one begin to become less common, but with the number of these types of incidents on the rise of America, that seems less likely to happen now more than ever.

Many citizens involved in the gun rights debate are trying to use this as a cry to support their cause.  Pro-guns activists are using this incident to try to support their side, saying that if armed security and churchgoers weren’t present, the shooting would surely have become a massacre.  However, the pro-gun control activists are also using this incident to try and support their side of the argument, arguing that the shooter being killed merely resulted in more deaths than were necessary, making this shooting worse than it had to be.

“I think that people have a tendency to over-politicize these things,” Mr. Nicklaw said. “Rather than looking at these shootings as a whole, pro-gun control and pro-second amendment people want to use this isolated incident to spread their word and support their argument, which ultimately just leads to more conflict and unrest than I think is necessary. We need to look at the bigger picture here. We can’t just look at this as isolated incidents to support whatever argument we agree with, we have to start looking at all of this as a whole, judging our decisions based on trends and long term research rather than single shootings.”

Many citizens are also attempting to wage a civil war over this incident.  Due to the split in arguments, and this shooting working as a catalyst for both, each side is running into conflict with the other, leading to many pro-gun activists to speak out more aggressively and even suggest a civil war against our country and its gun control policies.  This is an extremely dangerous proposition and one that is already starting to present danger. The Virginia militia has grown exponentially since this recent shooting, leading to many to worry about the intentions of the militia now that it’s expanding its arsenal.

“The militia does worry me,” said LoMascolo.  “There’s no way for us to know what they’re trying to do with all of their new members. It’s especially dangerous since we can’t look into the militia, so we have no way to know what plans they may have. I think we need to keep a close eye on the militia because we have very little ability to monitor them, we really need to take advantage of what we can do.”

With the dangers of mass shootings prevalent in America today, incidents like these are a necessity to cover.  With the chance of this happening at almost any time, it’s important to know how past examples of these incidents occurred.  Hopefully, these incidents start to decrease in frequency, but with more and more actions like this being committed multiple times each month, this seems to be less likely now more than ever.