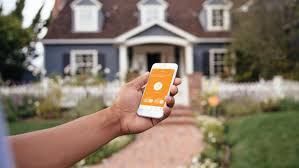 Weedsport 11th grade ELA teacher Mrs. Weston had some things to say about smart home technology. Weston says that she thinks that smart home technology is cool and that it is helpful for people who want it and need it. When asked what she thinks is the most interesting thing about it, she says, “I saw that commercial, where they have the guys on the plane and he starts his car or locks his car because he forgot to lock it… I think it’s really cool that you can control what’s going on in your house from a distance, like you can turn the lights on when you want them on and things like that.”

She thinks that those types of things are very helpful for people who are on vacation or not at home. She says, “Like if you’re away like at night but you wanted to appear like someone is home you can click a light on, most people without that, they go on vacation and they’re gone for a week, and they just leave their lights on for the whole week, that’s a waste of electricity so this is nicer when you can sorta program it to do what you want. You can turn your heat up before you get there so your house isn’t freezing before you get there.”

When asked if she thinks that smart home technology should be something to worry about, she says that she has heard of people being scared of getting listened to by their Amazon Alexa or Google Home, but she doesn’t really pay much attention to it. She says, “I feel like people just need to be aware of, and not just people but the manufacturers need to make sure the people are aware of what the downfalls might be of having all this stuff that’s very convenient for us but at the same time might be detrimental to our personal safety or our personal information.” Weston says that she has an Alexa but at the same time doesn’t feel the need to really have any smart home technology. She says that she thinks it can be useful and she wouldn’t mind having it, but wouldn’t rush out to go buy new technologies.

Weedsport student Monty Steinman had a lot to say about his smart home. He said “It makes the simple things in life much more enjoyable. Some mundane tasks are almost, if not, completely eliminated, and it’s something you wouldn’t even notice otherwise but once you don’t have to do it you couldn’t imagine it any other way.”

Steinman says that he likes to control his lights with his voice. He states, “It’s so much easier than getting up and turning lights on or off, especially at night when I’m in bed already and don’t want to get back up or if there are a few lights I wanna turn on I can do it all at once with one command, and if I don’t want to do voice commands I can control them all with my phone too so that’s nice. Being able to control my TV with Google Home is nice too.”

When asked if Steinman is worried about being listened to by his smart home technologies, he said, “No, because I have nothing to hide. The whole Ring doorbell compromise was kinda scary though, but at the end of the day, that’s a risk me and my family take at the expense of being more in touch with our home’s activities.” Steinman believes that there are certain smart home technologies that people should purchase and some others that people can live without. He believes that people should get a smart speaker because it can really come in handy for families. He said he would recommend the Apple Homepod. Although he does not have one he believes that the speaker on them are really good. Lastly, he said he believes that smart light bulbs can make everyone’s life easier.