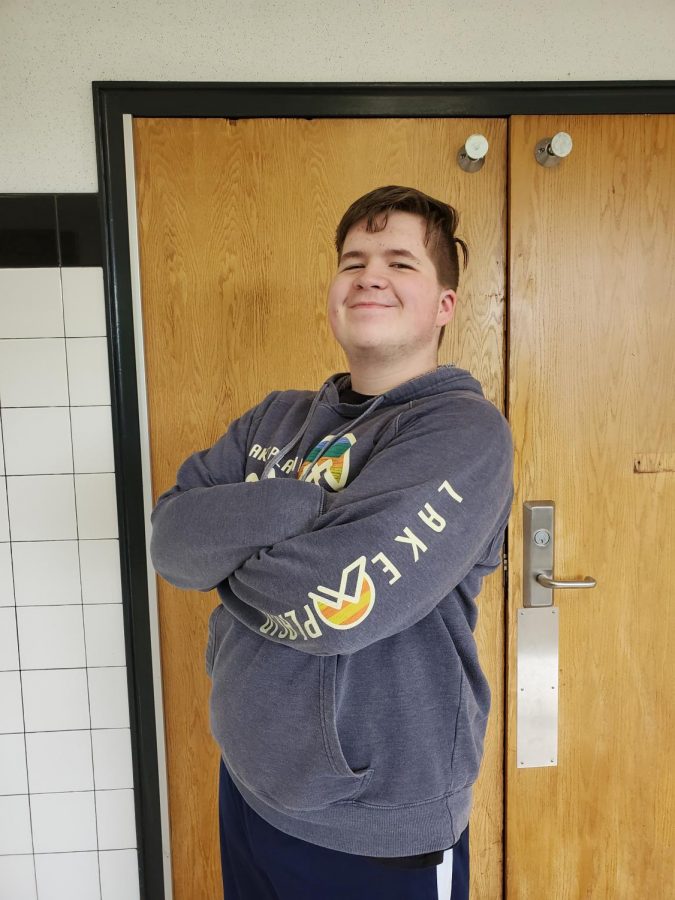 The bell for seventh period hasn’t even rung yet, still, there’s Tessa Higgins, sitting in her self designated seat in the middle of the classroom. Headphones in, the world tuned out. They are hovered over their tablet, pen in hand, working on a new OC for the next installment of Weedsport’s Finest. You wave to grab their attention and immediately start a conversation, geeking out about something that you like or that they like. Neither of you has to like what the other is talking about, but they still let you talk about it because they know it makes you happy and vice versa.

Tessa Higgins is a senior here at WeedsportJr/Sr high school and is well known for their creativity and the passion that they bring to their conversations and their school work. You will often hear people refer to Tessa by their dead name (birth given name) which I will not include in this article in respect for Tessa. Tessa came out publicly as transgender a couple of years ago, which many people found out through their TikTok account. Tessa told me they knew there was something different about them since they were five years old, but that at that age you can’t really comprehend it. Tessa said she thought she was gender fluid in 2019 and came to realize they were transgender through talking to another transgender classmate in BOCES. “You’ve got societal standards and have seen so much stuff that you’re scared to be who you are… SCREW THAT! Just be you,” she said.

Through the years Tessa has also had a bit of an online following on platforms such as Youtube and TikTok where they post animatics and all sorts of cool stuff. For many the idea of your classmates finding, let alone following your private accounts is embarrassing or scary but Tessa barely bats an eye at the thought. I asked them how they felt about their classmates following their socials and they said that at first, it was a really scary thought. They would hear others talking about what they were doing online and they didn’t really want those people to find their account. But now they say, ” People follow me on Tiktok, it’s perfectly fine. I’m comfortable with it, it’s just a part of social media. And yeah it can be weird, but also pay no mind to some of the people that follow you”. So if you want to get to see some of the cool content that Tessa creates you can follow them on TikTok at musicaltheaternerd3.

Tessa has done quite a variety of activities through the years. They have been in the school musical, the school newspaper, chorus, and even had a go at track and field. They have always been a team player and work well with others. They work hard to achieve their goals in whatever activity they’re doing, even, in track’s case, when they don’t want to be doing it. When talking to Mrs. Kerr about Tessa, she recalled that when Tessa was a sophomore in musical theater class she was performing a solo of “Make Them Hear You” from Ragtime, “(she) got very into the performance- before I knew it, she was standing on a chair!” When talking to Tessa about all the activities she was involved in, she said that her favorite part of taking part in these activities was the people. She said she looks up to the people that she worked with, “The musicals, to take those as an example. I love performing in musicals and I love my cast and some of the greatest there are Noah Hickok, Forrest Ngyuen, and Logan Tomaszewski. Those kids are amazing and just seeing them be them, it’s forgotten that when you do musicals it’s an ensemble thing and when I do it, it’s really nice to be around those people who sing and dance and get completely lost in the role.”

Tessa is a senior this year, and time is ticking to graduation. Tessa is planning on going to college, and I am sure she will excel at anything that is thrown at her in life. In parting, she had this to say, “The last message I want to leave to the people of Weedsport Jr/Sr High School is I would like to tell them to go forth and pay no mind to hatred. If people are going to go at you, demean you, and insult you, if you’re doing your best and doing your all and putting all your effort into stuff, just don’t care about what other people say.”

To Tessa and to other students that will be graduating this year, Mrs. Kerr has this bit of advice for you. Stay true to yourselves, live in the moment, and enjoy. To end this all off, I would like to quote Mrs. Kerr, “This is Tessa. Tessa has been a student of mine for many years; she even caroled around town with us at Weedsport Old Tyme Christmas when she was in middle school before she was my student. Tessa loves musicals, singing, film, and graphic design. She is a very kind and considerate individual!” Good luck with where the future takes you Tessa, and remember, you can leave Weedsport but Weedsport will never forget you.