“The Glue That Holds The School Together”

Get to know Mrs. Sheffield and Mrs. Nicklaw 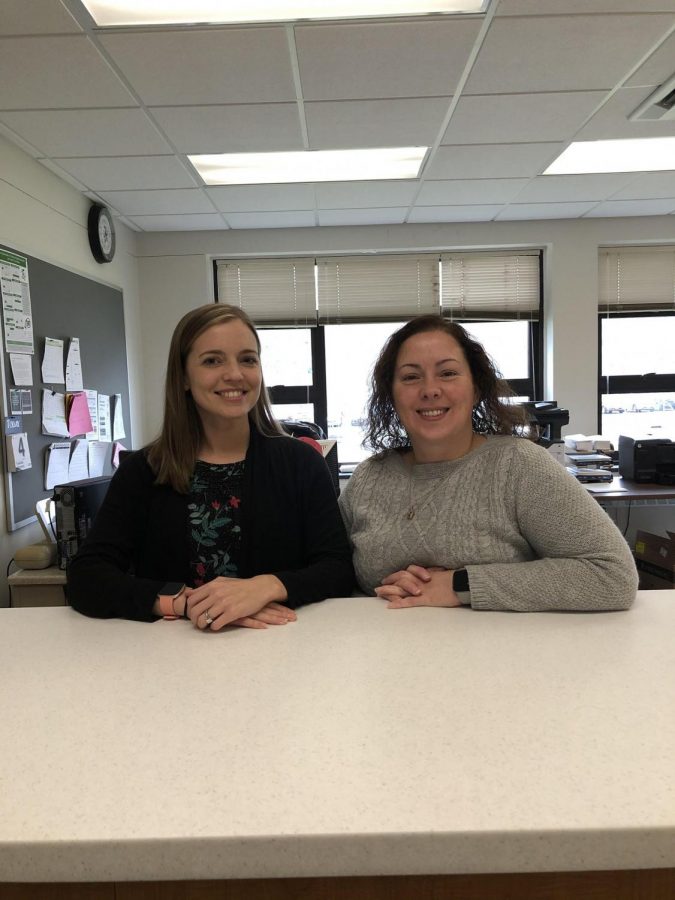 Mrs. Nicklaw (left) and Mrs. Sheffield are ready to help students and staff in the high school office.

Imagine being sent down to the main office to turn in your tech use paper you always constantly forget. As you walk down thinking to yourself, “I finally remembered to bring the papers,” a question lingers in your mind. Who do I hand the papers to? I’ve never really been down to the office and the only person I know is Mr. Fingland, but who are the secretaries? Are they mean and terrifying, or are they very nice?

Any fears you might have are put to rest immediately, though, because as you enter the office you see the two secretaries kindly helping some students. You introduce yourself and then you come to find out the two secretaries are Mrs. Nicklaw and Mrs. Sheffield, and they gladly take your tech use form. After you handed in the form they wish you a nice day and you’re back to your class, and you think to yourself, “What was I worried about?
Those two were really nice.”

Mrs. Nicklaw is a former student from Weedsport and she has worked for the school for almost five years. She has seen the school change throughout the years of her being there, and she recently told The Johnny Green that one thing that has changed drastically when she was in school is that teachers were strict and not as open about their personal life. Now teachers are more open and not quite as strict with their students. When asked about her typical day, she stated that she has a variety of things she has to do throughout her day – such as helping with bus departure schedules for sporting events and she also works with the yearbook quotes from Seniors. Mrs. Nicklaw also helps with the middle school ceremony.

When asked what are some of the more frustrating tasks to do, she replied that arguably the most difficult part of her job is when she deals with schools canceling sporting events and sending people on academic probation for sports – because she wants kids that aren’t the most academically strong to have something they love and have a goal for it.

When asked what is her favorite part of her job – her answer was catching up with teachers and students, but mainly the students, and asking how they’re doing academically and motivating them by tough love. The last question was about working with her partner in crime – Mrs. Sheffield. Mrs. Nicklaw explained that they work together great and that they’re close friends, but like every friendship, they have occasional disagreements but they always overcome it to work together great.

Mrs. Sheffield has been working for Weedsport as a secretary for almost four years now. She has had a different perspective on small schools since her son goes to a very large school. Mrs. Sheffield did offer her son to go to Weedsport, but he decided to stay in his old school with his friends. Mrs. Sheffield said she wishes her son chose Weedsport because of how close everyone is with each other.

She loves how everyone is very friendly here, and the teachers know all their students. She also wishes her son went to Weedsport so she could spend more time with him and she also appreciates that we don’t cut a lot of people out of sports in Weedsport. When asked what was her favorite part of the day, she said talking to kids and helping them out with their problems. Mrs. Sheffield said, “It’s nice to be needed to help those in need,” because she loves talking to the kids and helping them through do their problems.

When asked what is the most stressful part of your job, she responded with graduation and preparing for the Regents. As we were wrapping up the interview, Mr. Young showed up to share how he felt about the two secretaries, and he responded that they are, “The glue that holds the school together.”

Hopefully, if you are that student in the future who needs to turn in a form or stop by the office for any reason, you will remember this article and take a few minutes to say hi and get to know Mrs. Nicklaw and Mrs. Sheffield.