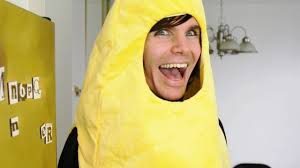 Onision was a popular YouTuber in 2009 who struck it big on the popular streaming platform for his Banana Song, most known as “I’m A Banana”. The song appeared on the popular comedy show Tosh.O, and since then Onision has continued with comedy skits and has appeared on bigger YouTuber’s channels such as Shane Dawson.

In 2019 the first allegations of child grooming came out against the once-popular YouTuber.  Onision, aka Greg Jackson and his spouse, had taken legal guardianship of an underage girl and had groomed her until she was 18, and then they slept with her. Grooming is when someone prepares a child for a relationship of a sexual nature, which I think everyone in the world can point at and say is wrong.

The problem with grooming is that you can’t legally charge a person with it because they haven’t actually committed a crime yet. I believe that the legal system should change this because it would catch predators a lot faster. Once the allegation came out, many of Onision’s former partners had come out with their stories about him starting a relationship with them when they were young and having been abused in some type of way.

In my opinion, one of the cruelest things that Onision has done to a partner is when he filmed her having a seizure and posted it to YouTube. He could have driven her to the hospital but instead filmed her shaking and saying that she saw a rainbow and continued to film her as she lost 3 years of memory due to that seizure. The allegations became louder when more and more YouTubers such as Repzion, Edwins Generation, and Creepshow Art along with many others began to give a platform to his victims. All of this led up to when Chris Hansen, who is most known for his TV series “To Catch A Predator”, took over the case on his newly created YouTube Channel.

People started watching Chris and believing his promise that he would put Onision in jail, mainly because he was known for catching child predators on his TV show so they trusted him. Even I would tune into his shows to watch the victims tell their stories. Everyone in the community supported him until he lost the only evidence that would put Onision and his spouse behind bars. Onision’s spouse had sent nude photographs to the girl they had groomed, and she had all of them on her computer. She sent that computer to Chris because he promised to send it to the FBI.

Instead of sending it to the authorities, Chris’ assistant Vincent Nicotra held onto the computer for months and tweeted that he had tampered with the evidence, which made the evidence not viable in court because of possible tampering. People began to trust him less and less, leading up to the main point of contention. Chris had sold the case to Investigation Discovery and was made into the series Onision: In Real Life. This is the point that I had stopped supporting Chris Hansen and his investigative work. People were furious because he sold a case that was not his, rightfully so.

Many of the YouTubers who had made videos on Onision refused to take part in the documentary because they thought that the documentary was going to use the victim’s stories without their consent. One YouTuber, Edwins Generation was contacted and he decided to ask the production team if they were actually going to use the girl’s stories and told them that he wouldn’t be a part of it if they did. They promised him, so he went on the documentary, mainly just to criticize Chris’ work on the case and to make sure that nothing was messed up and painted in the wrong light. He did a good deed even though the crowd was against him because he wanted to help the victims and get an accurate story out to the public.

The documentary was released on January 4th of this year and with it came mountains of criticism and outrage. The first episode focused on Onision’s rise to fame and his relationship with Shiloh (the girl who had a seizure). People were upset with this episode because it painted Chris Hansen as the first person to cover the case and as a hero figure. The only thing that I saw that was good with the episode was that it introduced us to Onision’s father who he had claimed was an abuser of sorts, which the father obviously said was untrue. The second episode hit hard because it did the one thing the producers promised it wouldn’t. They included the grooming victim’s story, and the only thing they did was blur her face and refer to her as a friend. They used clips that were easy to find out the victim’s name, but overall the main reason people were mad was that they promised, and broke a promise to VICTIMS.

Overall the layout and editing of the documentary were really good, and the story really is interesting…BUT you cannot take away a victim’s choice like that and you cannot promise things that you can’t follow through with. We are all praying for the day that Onision is hauled to jail, we know that day possibly won’t come but there always is hope that there will at least be justice in some sense of the word.

If you would like to find out more about the Onision case and the victim’s stories you can watch the links below:

Edwin on the TV Series:

You can find the documentary on Discovery Plus or contact me if you want a link.