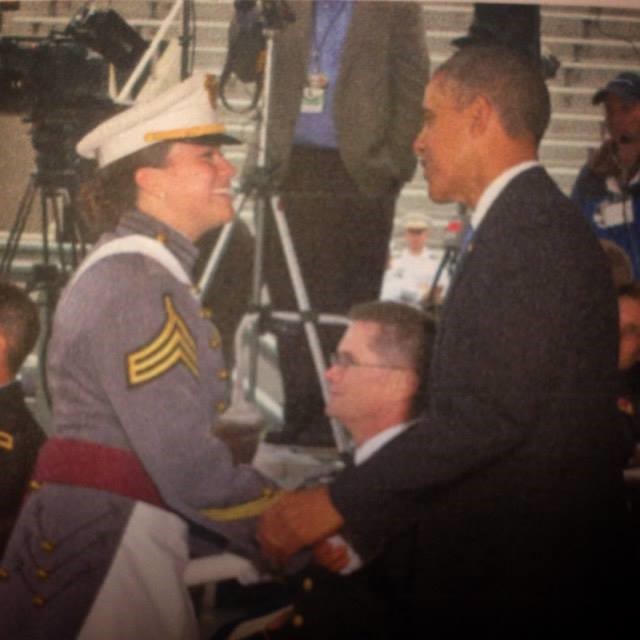 Meet Amy Sanchez, a Weedsport alumni from the Class of 2010. She was the first Weedsport student to attend the United States Military Academy at West Point. An overall outstanding woman who shows there is no limit to what she can do.

She plays the baritone, met former President Barack Obama, and of course she enjoyed watching the Navy football team lose to Army recently. When asked how Weedsport programs influenced her to join the military, she said, “I would say being on the field hockey team and sports teams in general showed me the discipline and work ethic that helped me move on to the military.”

When asked for some advice on how current Weedsport students can prepare to be successful after high school, she stated, “I would say to be prepared mentally and emotionally. You have to be prepared to be mature, because going from high school to something like a military academy is a 180. You have to be ready for a new aspect of college now, it’s like college from the movies.”

Sanchez went on to discuss her college experience, which was filled with ups and downs. “College was challenging but rewarding. I got to travel, am not in debt, and had a job right after graduation. I got to meet people from different cultures who had the same mindset as me.”

When asked if she missed Weedsport, she responded with, “I miss being a kid there. When I think of Weedsport, I think of field hockey and friends, and the naivete I had. I also miss seeing my family.”

When asked if Weedsport helped her to be prepared for life, she said, “Yes, I would say that there are many influential people who shaped me into shape. TL was a huge influence, along with Mr.Bleakley, and Mr.English. Out of school experiences helped a lot too. One of the biggest influences was when I first got to West Point, it wasn’t like Weedsport where everyone knows you and talks to you. At West Point it was cutthroat and it was strict, they didn’t care about your feelings, so it woke me up to realize that you have to do what is done and to get it done right. When Osama Bin Laden was captured, they had a riot, but not destroying, more of a celebration. It was so cool to be in a place with so much pride for our country.”

Her last piece of advice is for the current students of Weedsport. “Hold yourself to a higher standard. Don’t slack. If you’re committed to something, stay onto that, be constantly ready to better yourself. Always try to be better than you already are, educate yourself in multiple ways. Don’t stay in your own box, never settle for 50%, give 110%.”