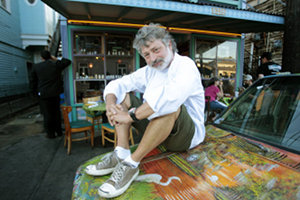 Everyone at some point in their life has thought about what career path they will take. It’s hard to choose for some people, while for others they have known it since they were little. The majority of high schoolers have an idea of what they would like to be but are not quite sure. As each year goes by and it gets closer to senior year, high schoolers are even more pressured to choose a career path. This is a story about a high school student like us who was standing in our shoes and chose a career path, but then changed it drastically and became very successful even though no one believed that he could.

Weedsport Alumnus Jack Leonardi is well known for his two restaurants Jacques-Imo’s and Crabby Jack’s in New Orleans. He recently came home for the holidays to visit his family and childhood friends. When he isn’t spending time with family or cooking, you can find him traveling. He loves to travel, he has traveled to more than 20 different countries. When he travels he visits well-known chefs around the world to try different culinary techniques and authentic food.

When he attended Weedsport he had no idea that he would become a chef, he was thinking about attending the Coast Guard Academy and studying engineering. He ended up joining the Coast Guard after high school but found engineering was not for him; instead, he fell in love with cooking and with finding the perfect recipe. This was a big change for him, but he truly believed that he would one day open a restaurant so he began studying business. He now recalls the time he mentioned the idea to his parents, “When I mentioned the idea to them they were surprised because they had no idea that I was interested in culinary. I’ve grown up with really great food but I’ve never shown any great interest in it. I remember my dad saying ‘Jack you’re crazy. Find a stable job and cook for your buddies on the weekends. The restaurant business is a very competitive field of work,’ but despite the advice of my dad I decided to go for it anyway not knowing where it would take me.”

While his family never knew that he had a talent in cooking, he credits his success to his mother and grandmother. In his own words, “My mother was a fantastic French cook, she would make stews in the winter, and we’d always have ratatouille with fresh eggplants in the summer. I hated it then now I love it. On my father’s side, my grandmother was an incredible Italian cook.”

When asked how he ended up in New Orleans, he said, “Well, during my final year in the Coast Guard, I was stationed in New Orleans to help clean pollution spills in the Gulf. That’s when I began thinking about my options of where to go next from there. One possibility was to work at my uncle’s restaurant in Ft. Lauderdale, Florida where I could get experience.” He describes his choice as, “I thought I should learn more about cooking to see if I really liked it before jumping completely on board. So one day, I went in my uniform and asked Paul Prudhomme for a job. The arrangement worked out good for the three years that I worked under K-Paul. But we just didn’t mesh together, so he gave me a recommendation to go work somewhere else.”

One day, Leonardi happened to bump into one of his friends that he had served with in the Coast Guard. His friend told him that he was opening a little place called the Warehouse Café, and then proceeded to ask Leonardi if he wanted to become a partner in his business. Leonardi accepted and described his experience as, “I learned a lot about licensing and opening up a bar.” In 1996, Leonardi and his partner sold the Warehouse Café. Leonardi then began considering opening a coffee shop or a bar when someone mentioned a space that was available. For two weeks, Leonardi sought out Hank Staples, who was one of the bar’s co-owners, to express his interest in leasing the empty space. Leonardi recalls, “He didn’t want to rent the space to me because he thought I was going to open a nightclub right next to him. But I was persistent and I’d go to the bar every day and wait for Hank. Finally, I got a call from him and convinced him to lease me the space, and that same year my wife Amelia and I opened Jacques-Imo’s.”

Leonardi felt very prepared for the opening of the restaurant as he had learned from everyone that he worked with. He gave a shout out to Barlow by saying, “I learned most of my cooking from Randy Barlow.” Something that most likely launched the restaurant almost immediately into fame was the hiring of the already-famous Creole chef Austin Leslie. “I had put an ad up looking for a Creole chef. I was planning on doing the front of the house and maybe being a part of the kitchen. When Austin Leslie responded to the ad, I said, ‘Look, I don’t have much to pay you’ but he took the deal anyways. We had a great time together and he became well known for his legendary fried chicken. As he got older he moved onto Pampy’s because he was becoming tired of working in the kitchen and needed a rest. There were no hard feelings for either of us and I wished him the best of luck. I am so glad that I got to work with him, he was a great man.”

The restaurant has grown from serving around 15,000 customers per year to over 100,000. When asked how he was able to be so successful, he said, “I never look at the competition, I just concentrate on what we do. Also, I am always open to learning something new.” But more than anything else, he attributes his great success to his hardworking staff. “The most important thing is the people who are working for you, I am constantly seeking the best people for my restaurant and then trying to create a good workplace for them.”

Jack Leonardi graduated from Weedsport in 1980. When he graduated he had no idea that he would one day own very successful restaurants. So, what is the moral of this very inspiring story? To think that you can still pursue your passion and become successful at it.

In the words of Jack Leonardi, “The secret of getting ahead is just to get started.”