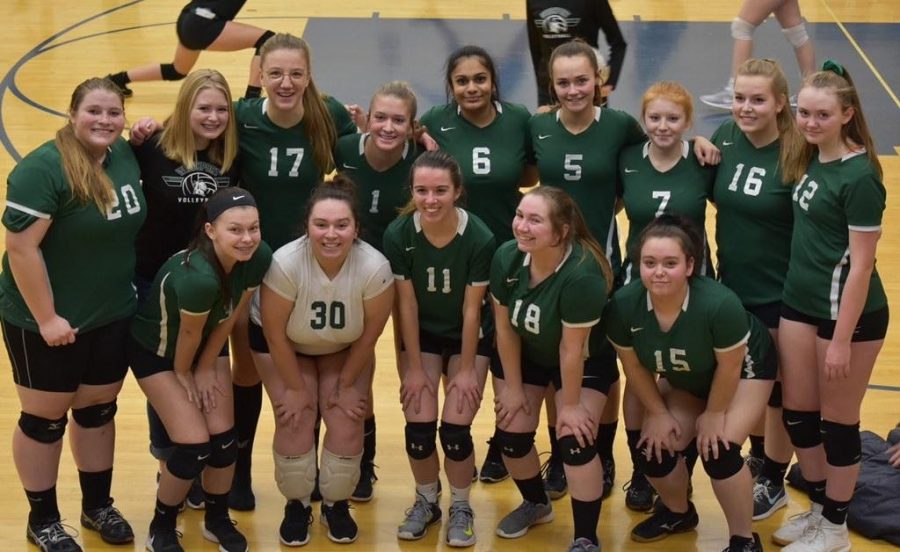 Anna Provoost (top row, third from left) poses with her teammates at a recent match.

At the beginning of the school year, a new foreign exchange student came to Weedsport HighSchool for six months. Her name is Anna Provoost; Anna is sixteen years old and grew up in Poperinge Belgium with her mother, father, and her brother. Throughout her senior year here at Weedsport Anna joined the cross country team, math team, and even the volleyball team. Anna also made many close friends and put dedication into her extracurricular and academic activities these past six months which makes it even harder for her to leave America. I was lucky enough to have the opportunity to play volleyball with a very talented person and to also sit down with Anna to ask her some personal questions about her life, her experience at Weedsport, and the differences between Belgium and America.

Q: What made you want to do this program?

A: “I wanted to experience different cultures, lifestyles, and meet new people.”

Q: Do you like New York and Weedsport? Why?

A: “Yes, I like it here a lot because it’s more relaxed here, I like everyone in Weedsport, and honestly the lifestyle is easier here. I also plan on coming back this summer to see the family I stayed with for the last six months and I also plan on bringing my parents too! I want to show them where I stayed, show them the lifestyle I had, and to introduce them to the family I stayed with.”

Q: Is volleyball similar or different here compared to where you live?

A: “Volleyball is different here in New York than in Belgium because back where I live we play international volleyball unlike America since America plays American volleyball. In Belgium, we have many different rules and sayings compared to here.”

Q: What will happen when you go back to Belgium? Do you know of any surprises?

A: “When I go back to Belgium I plan on getting my school work and the notes I have missed. I also plan on studying right away when I get back since I have exams the following week. I don’t know of any big surprises but I’ll probably have a party after my exams for a ‘Welcome back home’ celebration.”

Q: Is it hard to maintain your school work here and back in Belgium while playing volleyball?

A: “Yes, It’s very hard to maintain my school work. I’m so far behind with my work back in Belgium so I plan on studying and doing all of my missed work over break so I can get caught up.”

Q: Do you recommend other students to do the same program as you?

A: “Yes definitely! It’s an amazing experience especially to learn more about yourself as an independent adult and to meet new people. With my experience, I would tell the kids who want to do this program to do it for a year rather than six months since you’ll have more time where you’re staying at and I would also do it after high school so you won’t be behind with school work like me.”

Q: Do you miss your friends and family? Was it hard to leave Belgium?

A: “Yes, I cried three days straight before I left and when I came here. It was rough for me to leave everyone; especially being gone for six months. I hung out with my friends every single day before I left.”

Q: Is English a hard language to learn and to speak?

A: “ Eh, English is easy to learn honestly but speaking the language is hard to speak because I can’t pronounce certain English words. Like when I got to America I felt sick like I had to throw up; I tried to tell someone that I felt sick but the words wouldn’t come out so it ends up sounding like gibberish.”

During Christmas break, the Weedsport Varsity Volleyball Team had a home game against Port Byron, which was Anna’s last home game in America. The team decided to throw a senior night for Anna to show appreciation for her hard work and dedication she has put into this season. Our coach, Erik Nicklaw had some meaningful things he had to say to Anna and the crowd before the game on Saturday. Nicklaw said that he thinks of this team as a family and feels as if the volleyball team has become a family because of Anna and how she is a big part of the volleyball team. He also mentioned how Anna is always pushing the team to do better and how Anna is critical on herself during volleyball which is one of the things he likes the most about Anna since it reminds him of himself. Nicklaw also said that if Anna makes a mistake on the court he doesn’t need to yell at her for messing up or making a mistake since she already yells at herself for making a silly play, but that makes Anna do better on the next play and continues to play harder. At the end of Anna’s volleyball season, she was ranked second in all of section three in blocks. Which is an outstanding achievement!