(Some) Fall Sports Are Back 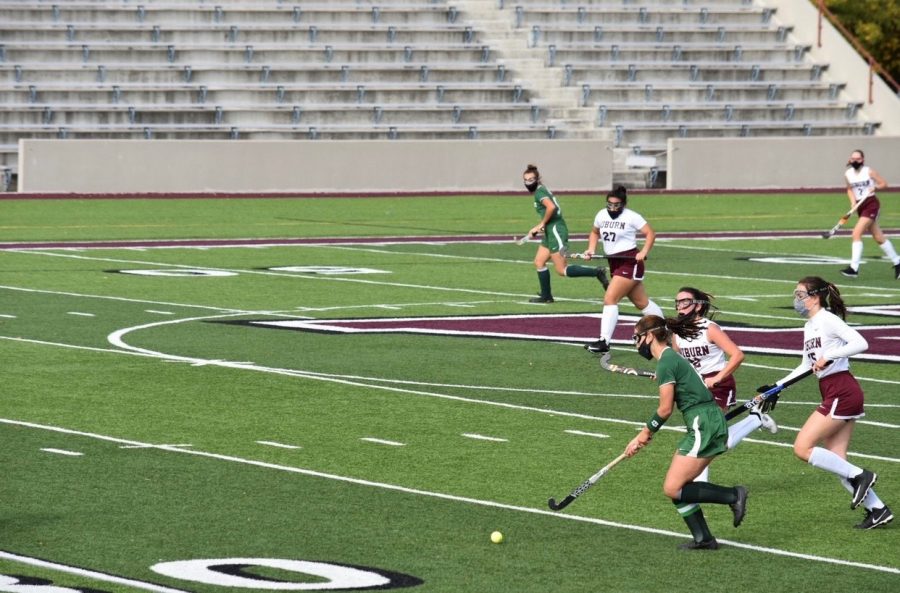 Courtesy of the Kepple Family

The Varsity Field Hockey Team recently faced Auburn, but fans were not in attendance.

During this time of COVID-19, fall sports have been affected by the pandemic to the point where some schools aren’t playing at all. However, Weedsport has decided to go through with playing with restrictions. This has made many question if it is worth the risk to play through such conditions.

Talking with the Athletic Director, Mr. Zachary Young, he was able to give a better understanding of our situation here at Weedsport and how we will be dealing with sports from now and here on out. “All of our allowance of when we can have sports or not comes from the state…myself and our board of education and some of our administrators came up with some different plans for the different sports that we offer. Which in the fall is just cross country and field hockey and we were able to put it together and make it work,” said Mr. Young.

There were also huge concerns about what would happen if schools shut down again. Mr. Young explained, “If we go full remote…my best guess would be that we would not have any practices or competitions that day…It doesn’t mean your season is over, it just means we would not participate for that time being. If it was a long-term pause I couldn’t give you an answer to that. I know a couple of schools have kept athletics even though it has been long term. That would be a decision a lot of people would have to factor in on.”

It is clear that in regards to shutting down again and future sports there isn’t a definitive plan, but they are trying their hardest to make a decision that is best for everyone. “Next up for us is winter sports that are supposed to start on November 30th. I have a meeting on November 4th with the OHSL athletic directors to come up with a plan…we will have a plan to try and have athletics. Our traditional winter sports would start on November 30th and our fall sports, football, and potentially volleyball, will start on March 1st. Then Spring sports are scheduled to start around April 19th. That has been the plan moving forward,” said Mr. Young.

So far Weedsport has been successful getting field hockey and cross country going. Both sports have continued to play and have a winning record. However, they have been restricted through limited spectators and cross country have had no invitationals. They are also not playing their usual yearly schedule and neither will have sectionals to end the season.

“I think it is extremely difficult for the players to wear a mouthguard, a mask, and goggles. Our players have worked very hard to adjust…there is no question it’s very hard on them,” said Varsity Field Hockey coach Theresa Leonardi. The players have strong opinions on the masks as well. “Personally I hate playing with the mask on but it makes me feel safer around people we don’t see and have contact with every day,” said senior Suzie Nemec. Playing with masks is tiring for the team but they have respected the rule in regards to their own, and other’s safety.

The masks were the biggest challenge the team had to overcome but there were other setbacks because of COVID as well. “Field hockey was greatly affected. We usually train for 3 weeks before our season starts, then we have ten four-hour practices, a scrimmage with four other teams, and a four-team tournament all before our first league game,” said Leonardi.

This year the field hockey team has only had ten two-hour practices before their first league game. “Please don’t misunderstand, I am happy we are playing, but there are a lot of changes that are making this a very different year. But in the end, we are just happy to have an opportunity to play,” said Leonardi.

Both the players and the coaches have made it very clear that it has been worth it to play the little amount they have compared to nothing. Nemec explains, “COVID has made my senior field hockey season so difficult. We never got to do the things we have done for many years and it makes me regret not putting my 100% effort into absolutely everything on and off the field. I love these girls to death and I wish the best for all of them and I hope we will have a successful season even though we will not have a sectional championship…”

While cross country and field hockey have continued to play, football has been pushed to the spring. Moving the sport has sparked some opinions. Varsity Football Assistant Coach Jon Sgarlata said, “Just like every aspect of life in 2020, football is a balancing act. How can we best participate in our sport and at the same time protect each other and our greater school community from COVID-19? I understand and agree with New York State making the decision to move Football to the spring. The logistics of trying to play football this fall (a sport in which players are literally slamming into each other on every play) didn’t seem possible.”

The players and coaches were all slightly disappointed with moving the sport to a different time of the year but they didn’t give up on their hopes for their season. “I know us seniors were all excited to play this year, and it just stinks that we can’t do anything about it…I’m just hoping we can have spectators for the season, when a crowd is there supporting you the feeling is just incredible,” said Hunter Morgan.

While there isn’t much information on what the season will look like we know, “Practice is slated to start March 1st. We usually start in August in the heat and slowly the season turns cold and often ends in snow. This year it will start with snow and slowly move to beach weather! It will be odd to start in March but our players are lifting and running getting ready for that day,” said Sgarlata.

He has been especially concerned that the players won’t be ready in time for the full contact of the sport. “…Football is not a sport you can just practice as a team a few days and then go play games. There is an acclimation process to get the body ready for full contact throughout a season. Much of this teaching and drilling happens in the very initial phases of the preseason. The normal preseason is in August and because there is no school we have “double sessions”. Football requires extra practice time because of the inherent risk in the sport. Players need a build-up to full-contact…COVID has made that much more challenging.”

Looking at all three sports, the coaches and players are all happy that they get the little season they do rather than no season at all. They have faced many challenges due to the pandemic and continue to persevere by finding a balance of staying healthy and playing. No one knows what next year will look like but we can only hope things will be back to normal. Coach Leonardi says, “I hope and pray next year will be back to normal and we will all be back to…regular sports…at this point, it’s impossible to tell what will happen…Either way, I have complete faith in the warriors!”