Winter Athletes Wrap Up A Season Unlike Any Other 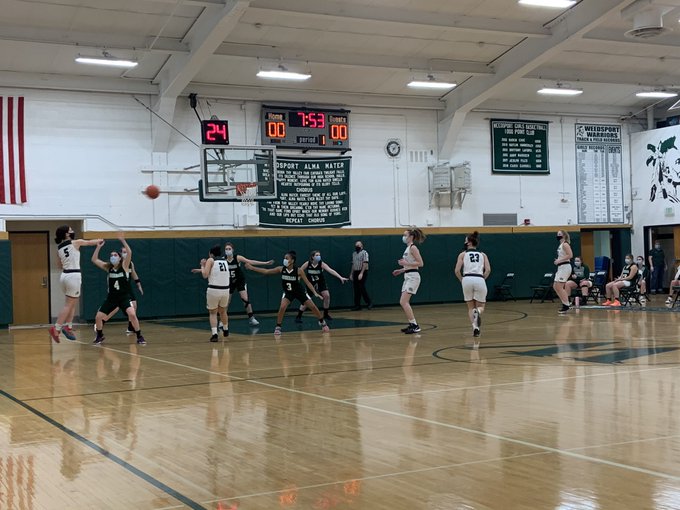 As the school year continues, sports have continued to be played at Weedsport. The winter teams have made it through the entire season without being shut down and have been put through very different circumstances compared to the fall sports.

The winter sports being played at Weedsport, have been basketball and swim. The key factor on why such strict rules have taken place is because they both take place inside as opposed to where in the fall the sports were played outside.

Where the two sports separate is when it comes to masks. While swimming you can’t wear a mask for obvious reasons but they had to be worn if they were out of the water. The basketball teams have continued to wear them at a constant throughout the season.

Along the lines of other changes, there have been no spectators allowed at the beginning of the season, so basketball games have been broadcasted and swim has had virtual swim meets. There was also a huge delay in the winter season.

Weedsport Athletic Director Zachary Young explains, “ The season was delayed due to the high numbers of the coronavirus and New York state not being allowed to start high-risk sports.”

If you ask anyone at Weedsport, they can tell you that basketball has always had an amazing program that is very talented. Seeing the sport affected by the pandemic has been very disheartening for many.

The challenges faced by the teams have been hard. Transitioning from one sport to another can be difficult but the huge break in between the Fall and Winter season had hurt many player’s conditioning. With the season quickly picking up with games there hasn’t been much time to prepare.

Weedsport JV Basketball Coach PJ Piascik explains, “There just hasn’t been enough time to play your way into shape, and there aren’t as many days in between games to really be able to condition in practice. In a normal season, it can take a good month or so to get to the physical condition that we want to be able to play the way that we play.”

A much more difficult thing to accept for both the players and coaches was that there would not be sectionals waiting for them after the season. Everyone has been grateful for at least getting the opportunity to play a season but having no sectionals especially for the seniors was hard.

“We’re fortunate in our program to be in a place where a sectional title is a realistic goal for us; so to not be able to chase that goal this season stings. We’ve worked for years to be in this position, so it’s a bit of a difficult pill to swallow,” Piascik says.

There is no question that the players have struggled to adjust to everything but they are still enjoying this odd season. Weedsport Senior Emma Stark says, “I had no idea that last year would be my last normal season but I’m so thankful to get one more chance to play with this team. I’ve enjoyed it a lot. It may stretch me very thin with the crazy schedule but I’m just trying to take it all in because my teammates are some of my best friends and it’s going to be very difficult to leave them.”

Along with the difficulties athletes have faced at Weedsport, they were put through a very busy schedule. The coaches and players have had fun with all the games but Piascik explains, “We’ve had a week where we played four games, and we’ve had a stretch of six games in nine days.” The players were able to adjust to this better considering many of them are used to playing three games in a single day during the offseason.

The players didn’t have many off days and had to learn how to manage their time better. They needed to be taking care of themselves so they didn’t become tired.

The schedule also presented new opponents. Piascik explains, “Rather than being tied to our OHSL Patriot League, we were put into a pod with some different schools like Jordan-Elbridge, Hannibal, Solvay, and Syracuse ITC. Each of those schools is larger than us, so it presented some fun new challenges.”

Players also were required to test for the Corona Virus this year to play certain teams. This test was offered on Mondays each week.

Despite everything working against the team, they have managed to stay hopeful and focus on their goals for the season. Stark explains, “My goal is to just have fun. Win or lose, what matters most is having fun especially knowing that each day could be my last.”

Many girls on the team had similar ideas. It was more important to them to spend their last moments on their team enjoying every moment than letting what little season they had pass by. Even the coaches kept this in mind, knowing that it could’ve ended at any moment and they should appreciate the time they had together.

Another main goal for the team was to win every game the season allowed. Looking back on the season years later would’ve been special for the coaches to know they went undefeated. They were able to successfully do this through working together.

Piascik says, “We’re so happy that all of our players got this chance to play, but especially that our seniors were able to put the Weedsport uniform on a few more times before they move on. This year’s seniors are a special group of young adults that have put a ton into our program to help make it as strong as it is.”

All coaches are hoping for things to return to normal next year and a regular offseason. Piascik is hoping for a regular 20-game season and says, “Hopefully we can all use this experience as a lesson in dealing with adversity and rolling with the punches.”

As we move on into our Fall two sports there are things we can expect to change and we have hopes for our spring seasons as well. Schedules for the sports are already out and they are more regionalized this year due to Covid.

As of March 3rd, the county is allowing spectators for indoor high-risk sports and has left the decision up to the schools. Young explains, “We’re starting to explore that here with some small senior events at the end of varsity basketball seasons.”

Spring sports are all scheduled to start on April 19th for varsity. Masks will still be required for inside practices but information for playing outside is still unknown.

Young is very hopeful that we could still have sectionals in the spring but it’s still to be determined. He even says, “I think it’s highly unlikely that we don’t have sectionals next year. I would be very surprised if we don’t.”

While everything right now isn’t set in stone, everyone is being patient. We can all hope that next year we can return to normal season and be glad for what we were given this year under these circumstances.